US Citizenship and Immigration Services (USCIS), screens visa for skilled foreign jobs including IT Jobs released its numbers. The hard numbers actually bolstered the rumoured complaint: a few number of companies which outsource IT Jobs get a disproportionately hiked number of H-1B visas. Not only that, these companies pay below-average wages to their workers, stats dictate.

While this campaign is initiated by D. Trump to squinch immigration regulations, this also compelled USCIS to formally disclose the hard data regarding H-1B Visas issues in the last two years. Earlier, this data was available as an estimation or soft numbers.

Almost 4,000 companies submitted H-1B visa applications in fiscal 2016. The top 20 sponsors took home 37% of all visas issued. Companies outsourcing IT Jobs made up the top five.

These numbers reveal that the salaries offered to workers are low. Have a look:

The data also revealed that these salaries are varied to a higher extent because of the education specifications of the employees. These job roles demand special skills with a Bachelors or Masters in the domain. Therefore, it is clear why 98% of approved visas were for people with either of these degrees.

The data also revealed that workers employed by Google, Amazon and other organisations with in-house tech staff have more than 60% of employers with a Masters degree. For IT jobs, employers have a Bachelors degree. 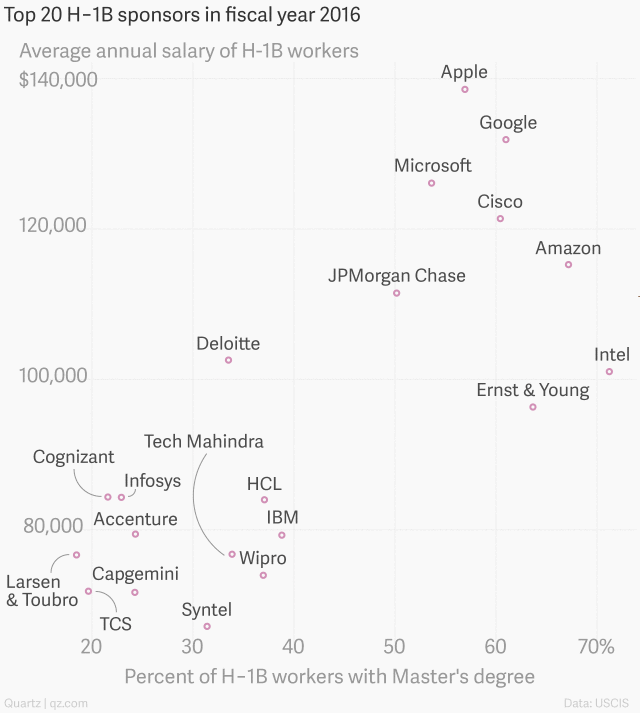