One year ago, I left San Francisco, sold and gave away everything I owned, and moved into a 40 liter backpack.

I traveled to 45 cities in 20 countries, 3 Disneylands, and 1 bunny island.

I also worked 50 hours a week building and launching a startup.

And my total costs were less than just the rent in San Francisco.

I spent Winter in Australia’s Summer, Spring in Japan, Summer in Europe, and Autumn in Southeast Asia.

Traveling is not the same as vacation

There’s a growing community of “digital nomads” who live a location independent lifestyle. We’re software developers, designers, writers, journalists, engineers, and all sorts of people who share a passion for the work we do and experiencing the world.

I propose that a nomadic lifestyle is a productive way to build a real company. I’m working hard on bootstrapping an ambitious startup, Moo.do. I’m traveling because it’s cheaper, more productive, and more inspiring than sitting in one place. Traveling is the most responsible choice for the sake of my company, my finances, and my personal growth.

I became a nomad by accident

Three years ago I was preparing to leave my job at Microsoft to move to San Francisco to start a startup. My friend asked me “but why do you need to be in San Francisco when you can work on a computer from anywhere?” His question made a lot of sense. As I thought about it more, I began to question my assumptions about a “normal life” which don’t make sense in our modern world.

I reject the idea of a 9–5 job. I want to explore the world while the sun is out instead of wasting the daylight hours working inside and dreaming of my next vacation.

I reject the idea of settling down. I want to experience new cultures and eat new foods instead of being stuck in the neighborhood around my house.

I reject the idea of stuff. It’s not the size of my TV that matters. The world is much more interesting than what’s in my house.

I reject the idea of boredom. I’m constantly surrounded by new places, people, and experiences. I haven’t felt bored since I started traveling and I don’t even have the desire to watch TV or play video games anymore.

I reject the idea of a bucket list. I have a list of things to do and I’m doing them.

So off I went, with my crazy new ideas about life in tow.

But it didn’t work out so well.

After traveling for 6 months, I gave up and still moved to San Francisco. Traveling was fun, but I had a great idea and I needed to really focus and get real work done. What better place to build my startup than Silicon Valley?

But I soon found myself becoming too comfortable and slowing down, getting easily bored and distracted, and watching a lot of TV. I sat at my computer for 12 hours a day but didn’t feel like I was productive.

On a trip to New York, my friends went to work during the days, so I went out and worked in coffee shops and in Central Park. Suddenly I was hugely productive, getting much more work done in 6 hours than in my normal 12 hour days. The same thing happened a few months later on a trip to London. I was even coming up with better ideas because the new experiences and surroundings were keeping my mind more active.

Having figured out the pattern, I left San Francisco a year ago, fully committing to a nomadic lifestyle. And this time it feels like I’ve figured it out. I’m happy, productive, meeting great new people, learning about real global problems to solve, and I successfully launched Moo.do.

This is what I’ve learned over the past year.

Traveling is cheaper than staying at home 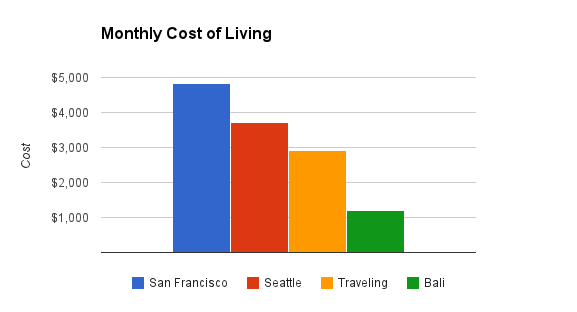 This is my average total monthly spending from one year living in Seattle’s Capitol Hill, one year living in San Francisco’s Upper Haight, one year traveling to 20 countries, and one month at a hotel in Bali. It is much cheaper for me to travel. Since the majority of my costs are from trains and flights, it’s significantly cheaper if I stay in one place. 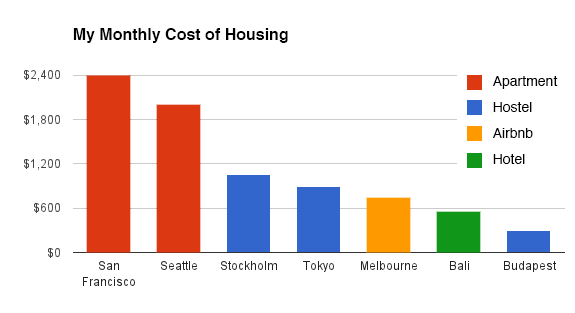 San Francisco’s median rent is now $3,120 per month. My total cost to travel all over the world and live the life of my dreams averages to $2,921 per month. I’m living in Bali right now for $1,200 per month. The total cost of living in Chiang Mai, Thailand is $641 per month.

When I first started traveling, I was a great tourist, taking pictures of everything and doing all the activities listed in tour guides. After a couple of exhausting weeks it occurred to me that I’m not on vacation. This is my life now. I slowed down and realized that if I have a month to explore a new city, I don’t need to do it all at once. I can explore the city for a few hours and still get a lot of work done.

I was surprised to find out that I’m significantly more productive while traveling. But it makes sense. If I’m only in Rome for a week, why would I waste my time on Facebook? Being constantly surrounded by novelty reduces my boredom and increases my focus, and even makes me feel healthier and more creative. 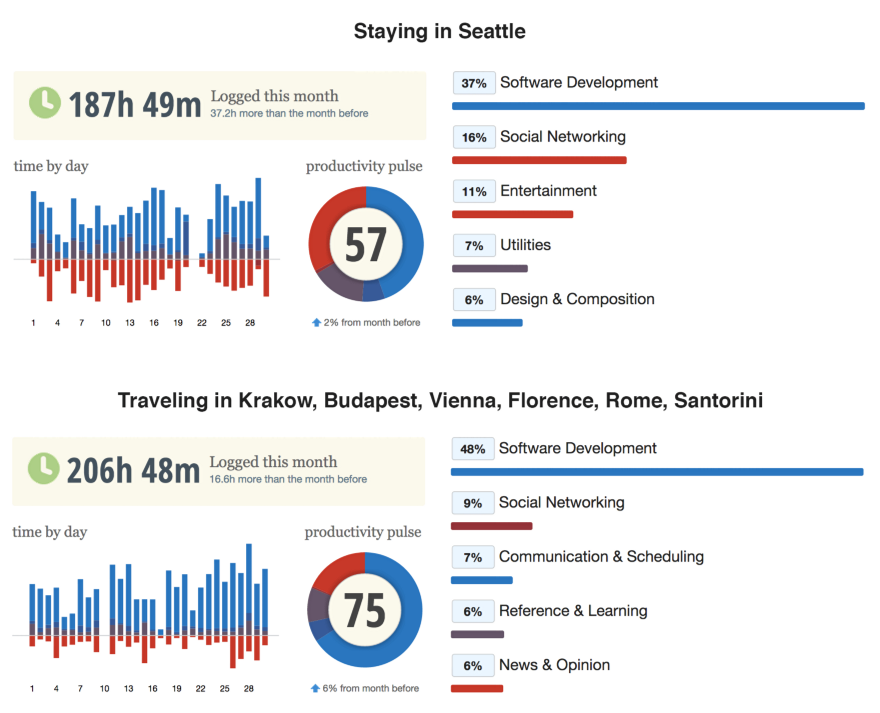 I went back to Seattle in June to work next to my co-founder and hash out long-term plans. My development time was surprisingly less productive than while traveling. I was sitting at the computer just as much, but was more easily distracted by internet and TV. And even though I was in 6 different cities in September, I managed to work extremely productive 48 hour weeks. Being more focused while working gives me more time to enjoy the rest of my life, so this is huge for me.

Instead of working during the daylight hours and pushing all my free time to the worst part of the day, I prefer to enjoy the days and work at night. I get out of bed faster when I’m excited to go out, and when I don’t have to commute there’s just more time in the day. I like to work 7 days a week with flexible hours so I can take a day off when I please or enjoy an empty movie theater at 2pm.

I wasted a lot of time when I worked in an office because of commuting and the massive distraction that is the internet. Now I spread my work throughout the day and take big breaks for exploring. After working for a few hours, I reach a milestone and explore the city until I want to get back to work. Or if I hit a problem I can’t figure out, I walk it off until I’ve solved it. Cycling between fun and work makes my days less exhausting and makes me less prone to burnout. 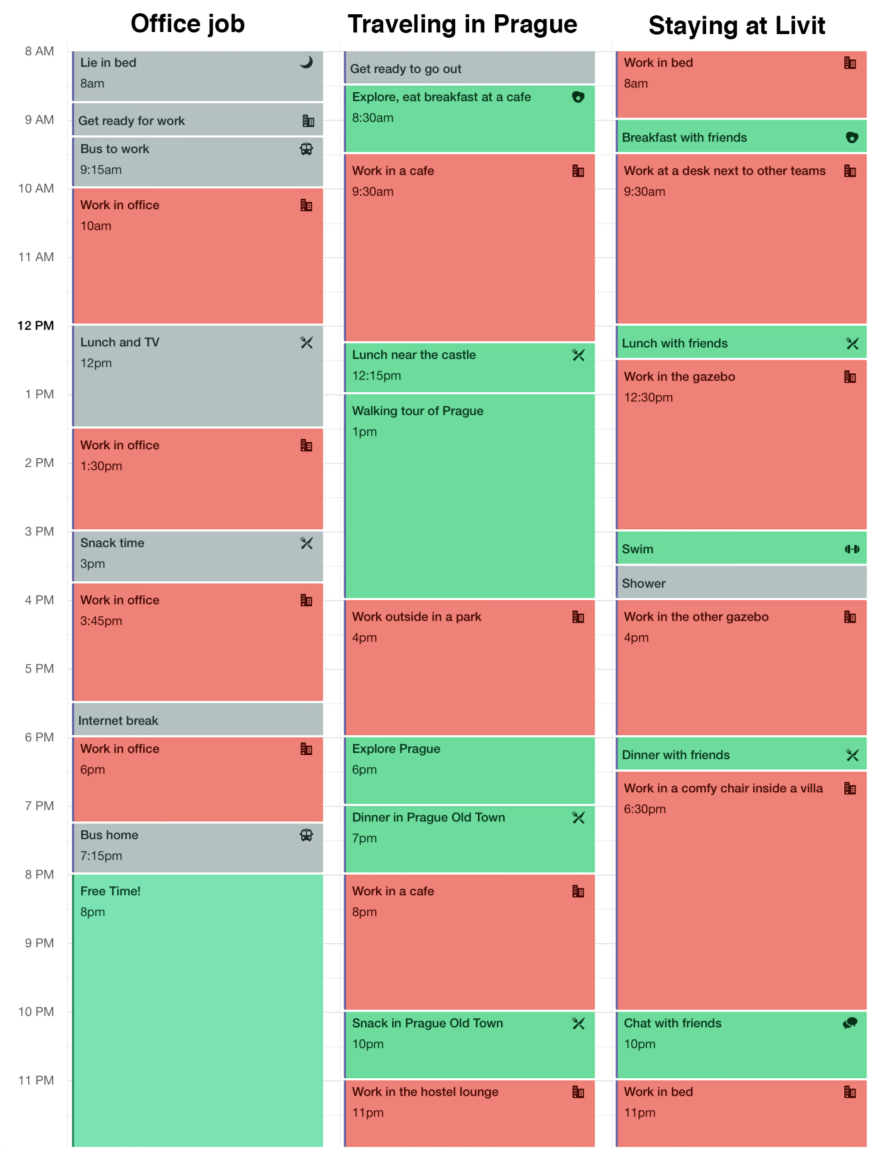 My stay at Livit in Bali was the most productive time of my life. It’s an integrated co-living and co-working space, with all meals provided, so I could focus on my work and not worry about anything. And it’s all inclusive for $1500 per month, less than just the rent in most major tech cities. This is a great trend and I’m happy to see it growing as similar startup getaways are popping up in Bali and around the world.

I now have friends all over the world whose life experiences are very different than mine and bring fresh perspectives to my ideas. I’m learning about the real problems that affect the world on a global scale, which will make me into a better entrepreneur in the future.

It’s easy to find great people to learn from. There are co-working spaces in many cities where digital nomads can meet peers from around the world and find collaborators. Nomads give each other travel and work advice on Reddit and Nomad Forum, there’s over a thousand of us (and growing) in a chat room at hashtagnomads.com, and the community is organizing meetups all over the world.

It’s never been easier to live and work as a nomad. Traveling is cheaper, more productive, and more inspiring than staying at home. Working in an office is a relic of the past.

The digital nomad revolution is just beginning and I’m excited to help it grow. I hope you and I will meet some time, somewhere out there.

(This post appeared on Medium as written by Jay Meistrich) 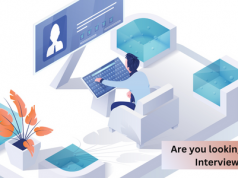 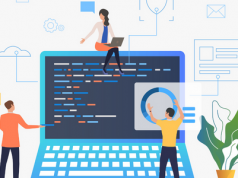 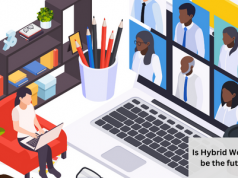