I would like to address the untiring efforts put-in by Aspiring Minds. I am greatly indebted to AMCAT for providing me the gateway to a whole new world of possibilities.
My job hunt began way back in Sept-2011, when campus recruitment began. I was one of the unfortunate ones of not getting placed since I wasn’t from the CS/IS/IT background. The turn up of the companies was good and I got through many companies until being rejected in the last round as I was not aware of the subject matter and programming concepts in detail.
It was then that I realised that chasing companies is of no use unless I have some knowledge which can be put to use by the company. I got to know about AMCAT that gauges the overall competency level of students in all aspects, careful and meticulous grading system, which is of Industry standards. I was very eager to take up AMCAT and registered immediately. The test pattern that I came across taught me to focus on the subjects that were quiet often asked in interviews (Data Structures, ADA, OOPS) etc. I rigorously prepared those subjects as a result of which I have landed up with a job at HCL.
I was surprised at the moment when I saw that Aspiring Minds was conducting a drive for HCL. I picked up my courage and went for the drive. The first day was the aptitude test (AMCAT). On the second day, there was an English test based on grammar followed by a communication round where the fluency of the candidate is checked. Third day was a technical round in which the various technical aspects were checked- one must know the basics thoroughly and lastly there was an HR round.
I would like to sign off saying that I credit my job offer entirely to Aspiring Minds.
Raviteja M.
Nitte Meenakshi Institue of Technology, Bangalore, 2012 Batch
Hired by HCL Comnet
More than 25,000 students get career guidance using AMCAT every month. On an average, 30 students are hired through AMCAT every day for various companies for diverse profiles. To know more, visit: http://www.myamcat.com/ 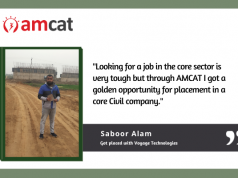 Got A Job In The Core Company, Thanks To The AMCAT Exam 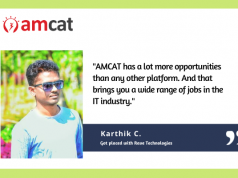 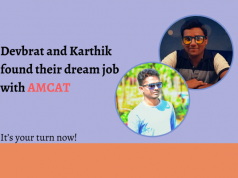 Finding a job has become easy despite everything, say Devbrat and Karthik

How To Prepare For Campus Placements Before The placement Season

10 Tips On How To Search For Jobs While Sitting At...